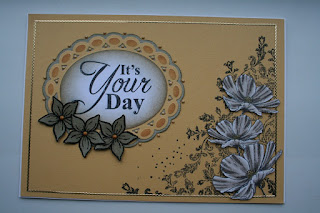 A year and a half ago I won an Indigo Blu stamp, that was that big I did not even have an acrylic block for it. Then I bought the new Sheena Douglas stamps, and there were a few stamps there that were so big, again I did not have a block for it. Leaving my no choise, I went to a craftshop and bought a bigger acrylic block! And first thing I wanted to try was that corner stamp! I kinda used the wrong paper to stamp on, as it has a little linnen effect, therefor the stamp did not stamp completely black, but I liked the effect so I kept it. I restamped it on some white paper, colored the flowers with prisma pencils and sansodor, cut them out and stuck them on the card. I really love it!!!

yvette
My name is Yvette, I am 40 years of age, I live with my lovely boyfriend Ian and our 2 kids and 4 dogs in the wonderfull city of Hull. I have always been a crafty person, and for some strange reason have always had a thing for pretty papers! I just enjoy feeling and looking at them :) And like all good crafters I buy 2 (at least) sheets of the same paper. One to use and one to keep :) I have been making cards for 10 years now, starting with old wallpaper and now I am trying my best with stamping and coloring, and who knows what the future holds in cardmaking :)